“8 of our Year 10/11 pupils completed their DofE expedition on 24th /25th June, walking from Bradford on Avon to Brokerswood on the Friday, camping there that night, then walking from Brokerswood to Westbury White Horse on the Saturday.  They now have to get signed off on their Volunteering, Skills and Physical sections to complete their full Bronze DofE award, most have done the hours on this and just need final sign-off. We are delighted to be able to offer this wonderful opportunity as a small school, and all students will have the opportunity to follow in their footsteps when they get to Year 9 or Year 10” Mrs Jones – Expedition Manager

“On the expedition we started off at Bradford on Avon train station and were on a mission heading to Roundwood campsite. We went through some very pretty places such as Iford, Farleigh Hungerford and Westwood. I think I can speak for everyone here we have never been so happy to see a teacher outside of school. Once we finally got to the campsite of around 5 hours of walking, we all set up our tents and hung out with each other for a while until we had food. By this point it didn’t feel like we were doing this for school or a qualification but doing this for ourselves and it was just like hanging out with friends. After a fun game of hide and seek in the woods we all went to sleep.

On the second day we walked through Dilton Marsh, Upton Scudamore and then proceeded to make our way up the White Horse. Day two was much more enjoyable because we had less food to carry and we knew what we were getting ourselves into.

My DofE experience was something so great and fun, it was filled with laughs, tears, and perseverance. We talked about old memories and made new ones. I would really encourage the following year 10s and year 9s to do DofE because it was one of the best experiences in my life”

“We visited Park Row Synagogue in Bristol at the beginning of May. One of the members of the synagogue community showed us a Torah scroll and talked us through different parts of the building like why there are stars, why it faces East and why there are no pictures of people. He explained about Kosher food, some major festivals, Bar Mitzvahs and what it means to be Jewish. The students asked some good questions! Very helpful for those doing their Religious Studies GCSE and those who will be starting it soon!”

This week we went to Appleford School near Salisbury for a game of tag rugby with a team of year 4-6 pupils.  When we arrived we had a little warm up and then got started with the game.  The first half went well and the team worked together making lots of tags and kept their line. At half time it was 6-2 to Appleford. The second half we came back stronger and defended very well. The game ended 9-4 to Appleford, all the children played amazingly well and showed good sportsmanship, skill and ability. J and J were awarded Star of the Match nominated by the other team.  Appleford had kindly arranged some tea for after the game so the children were able to enjoy some sandwiches, cake and drinks together before heading home. Well done to all who played. 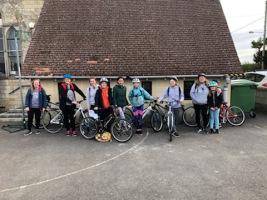 The whole school went on a sponsored walk/cycle to raise funds for our new extension.  Pupils had the choice of walking 5, 10 or 15 miles or cycling 15 or 30 miles along the canal towpath.  The Headteacher decided to give herself a personal challenge and carried on walking for 26 miles.   A fantastic sponsorship amount of over £7400 has been collected, and the pupils, teachers and parents had a lot of fun.

“We had an amazing time at Mill on the Brue last week. When we arrived the weather was wet but it dried up for our first activity which was the assault course. Having been wet it was rather muddy but I guess that will be no surprise to you now that you've seen the clothes that were brought home! On Thursday and Friday we were blessed with lovely spring days. The children had a busy time going from crate stacking on the high ropes, to air rifle shooting, to the climbing wall and canoeing on Thursday. They even went on a walk behind the centre across the beautiful rolling hills of Somerset looking out towards Glastonbury Tor. On Friday we began with Quick Flight which was a bit like a mini bungey jump at the start. That was a bit of a challenge for us all, staff included! It was good to finish our stay with what many would consider a bit of a favourite - the zip wire! The food was good and included the nice treat of some pain au chocolat for breakfast on Friday. The children were great throughout and settled down at night quickly and sensibly, which was greatly appreciated!” Class 5 (Years 10 and 11) went ice-skating in Bath as a special end of term activity. 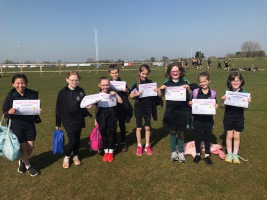 “The children started off playing some rugby related games in a group with another school, they then had a break and the last hour played a couple of games of tag rugby. The children all got a certificate at the end and I was asked to pick three children that I was most impressed with, it was a difficult decision as they all did so well but EB, FY and IG were the ones that stood out the most and they each received a key ring. Well done to all the children who attended” A big well done to all the children who played in the football tournament on Monday. We had some tough games and unfortunately didn't win any. They should all be very proud of themselves though as they worked very hard and didn’t give up. Highlights were J's great goal set up by C, and N’s fantastic goalkeeping.