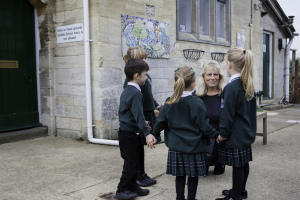 Choosing a school for your child is a huge decision and hopefully the information contained in this section will help you as you seek to make wise choices for your child’s education. Emmaus School is founded on Christian principles to educate children from 5-16 years in a caring, stable family atmosphere of love and respect. We would love to show you round our school, as nothing beats seeing a school in its normal, everyday routine. We offer your child the opportunity to do the same thing through experiencing a taster day. We also hold Open Day events. For more information about our upcoming events or to arrange a visit to Emmaus School please contact us at info@emmaus-school.org.uk or call the School Office to arrange an appointment.

The Bible is central to all that is taught at Emmaus School, not in a false, forced way, but in a natural, God-centred way, so that the children learn that it was God who both created and sustains this universe and makes life meaningful. You can read more about the curriculum here.

The Curriculum for Reception to Year 6

We believe in striking a balance between traditional curriculum values and ensuring that pupils have plenty of opportunity to learn through doing and experiencing. Undoubtedly, reading is the key to unlocking the rest of the curriculum and Primary school teachers invest a lot of time to ensure pupils have the best possible start in learning to read.

Primary pupils also gain solid foundations in mathematics, spelling and handwriting by following carefully planned schemes of work and using a wide range of the best curriculum materials available. Through studying science, history, geography and Scripture, pupils gain an understanding of God's wonderful world, but there is still plenty of opportunity to develop creativity in music and art, and physical skills in PE and sport, as well getting an early start in modern foreign languages in French lessons. Play is important, too, and pupils make good use of the outdoor area for structured play and free recreation, as well as learning the basic skills through maths and language games. 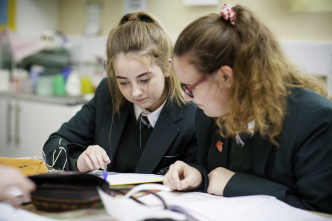 The Curriculum for Year 7-11

We continue to build on the excellent work of the Primary Department and widen the curriculum to include subjects such as ICT, Food Technology and modern foreign languages, whilst still maintaining the balance of academic study and rich cultural experiences. Pupils are increasingly encouraged to take more responsibility for their own studies and become more independent learners. This stands them in good stead, should they decide to continue their studies at one of the local 6th Forms.

At GCSE Level, pupils normally take a core of 5 subjects: mathematics, English language, English literature, French and one of the sciences. Most students opt for another 3 or 4 subjects choosing from the following: chemistry, biology, physics, Spanish, history, RE, geography, ICT, music, art, food technology and PE.

Many of the GCSE courses lead to International GCSE qualifications, which have long been considered to be academically rigorous, thorough and excellent preparation for A Level, or the increasingly popular International Baccalaureate. Year after year, pupils gain excellent academic results which can be viewed on the School’s website. Year 10 and 11 pupils are also offered careers guidance and take part in work experience. 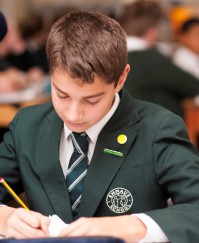 Pupils’ progress is monitored by annual tests in reading and spelling which allow teachers to compare pupils to the national average in each year group. The Cognitive Abilities Test (GL Assessment) is used annually from Year 4 to test the children’s potential in the 3 areas of verbal, quantitative and non-verbal reasoning and, in the secondary department, these tests give accurate predictions of the GCSE grades individual pupils can be expected to achieve. Since it is not possible to ‘teach to the test’, lessons are devoted to teaching rather than preparing pupils to perform well in tests. Pupils also take end of topic tests throughout the year and senior pupils have an annual exam week in the summer term.

Provision for pupils with learning difficulties, disabilities or those for whom English is not their first language

The School has limited means to adequately staff and resource pupils with specific needs, however, consideration will be given to pupils with learning difficulties, disabilities, or those for whom English is not their first language.   Each pupil's application is considered on its own merit, taking into account whether the School is adequately staffed and resourced to meet the individual pupil’s needs. Where a child has an Education Health and Care Plan, or special educational, physical or pastoral needs, the School will discuss with the parents what the School is able to offer, which may involve additional cost to the parents. 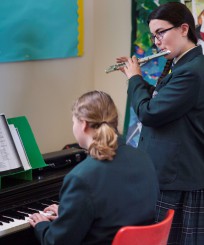 Pupils are encouraged take advantage of the wide range of extra-curricular activities on offer. School events throughout the year offer the pupils opportunities to perform in singing, drama and music ensembles. Private music lessons are available during the School day. There are after school clubs where, for example, pupils can learn to play chess or take part in the Adventure Service Challenge and the Duke of Edinburgh Award.

The pupils organise a School Council and Christian Union themselves and thereby gain useful life and leadership skills, as well as serving the school and wider community through fundraising and other charitable ventures. Throughout the year, educational visits are arranged to support the curriculum and broaden the children’s cultural experiences. Visits to museums, galleries, science lectures and the theatre are arranged, as well as field trips, residential trips and exchange visits to France.

Emmaus School is delighted with the findings of the March 2016 Independent Schools Inspectorate (ISI) report, this being the first ISI inspection of the School since Head teacher, Miriam Wiltshire, was elected as a member of the Independent Schools Association in December 2015.

Pupils are well educated in line with the school’s aim for all pupils to reach a high standard of education, be able to think for themselves and make a positive contribution to society, based on Christian values.

The ability profile of the school is above the national average.

The Spiritual, moral, social and cultural development of the pupils is excellent.

Since the inspection, the school has taken the following measures to ensure compliance with all the regulatory requirements:

The school already has well-developed plans to implement some of the improvements suggested by inspectors.  However, the school’s policy is for pupils in EYFS (Reception) to start independent writing when they are ready, which may not be until they are in Year 1.  Similarly, the deliberately restricted use of ICT in Primary is also well-thought out, and the high achievement of Primary pupils over many years is testament to the effectiveness of the tried and tested teaching methods used by Primary teachers.

Emmaus School is indebted to the ISI inspectors who very quickly understood Emmaus School’s unique character and made a valuable contribution to the school’s future development.

The school had an ISI Progress Monitoring Visit in October 2016.

The school had an ISI Compliance Inspection in March 2019 and we are delighted that the School complies with all of the Independent Schools Standards.

For first hand accounts of how parents and children have enjoyed and appreciated life at Emmaus School, click here

For further information about Emmaus School admissions, please download a copy of the prospectus. There's also a download available of the application form.

If you have any further queries or would like to arrange a visit to Emmaus School, please feel free to contact us by email or by telephone during school hours.

Once again we are delighted with our GCSE results.  Emmaus School has small cohorts each

academic year, and this means that our statistics have the potential to vary quite widely year on

year.  Just one pupil not performing as well as expected can bring down the average results.  As a non-selective school, we have a variety of abilities, and this year an unusually high proportion of

the group were above average.  Only 2 results out of 34 exams taken were awarded a grade 3 or below.

Here are some of the headlines:

At Emmaus School, pupils take Edexcel International GCSEs in the following subjects: English, History, Geography, Chemistry and Physics. IGCSE stands for “International General Certificate of Secondary Education”. It is equivalent to the GCSE qualification which is taken by students in Year 10 – 11 in the UK to prepare them for further pre-university level study, such as A-levels.

IGCSEs have long been a popular choice in independent schools as historically they were viewed more rigorous and offered more stability due to fewer Government-led changes. IGCSEs were first made available in state schools in 2010, but have now been phased out to reflect the move to reduce the amount of coursework required in the GCSE examination to the absolute minimum, and the greater emphasis on the final exam, after two years of study.  This means that there are now very few differences between IGCSEs and GCSEs.

Unfortunately the Government does not include IGCSE results in the league tables, and this may mean a decline in schools offering the qualification in the future.

Every October, pupils in Years 4-11 take the Cognitive Abilities Test which is produced by GL Assessment and is widely used by schools in the independent and state sectors.  This enables the School to track the progress of each pupil annually against national data, and for the older pupils, it gives a useful prediction of how they are likely to perform at GCSE Level.

Teachers at Emmaus School believe that CAT tests are an excellent indicator of pupil progress, since it is not possible to ‘teach to the test’.  The tests themselves are much less stressful for pupils, many of whom report that they have enjoyed the experience and not really realised that they were being tested!

Each year, pupils from Years 1 – 9 are tested in reading and spelling using tests supplied by GL Assessment – The Suffolk Reading Test and the Nelson Single Word Spelling Test.  These standardised tests indicate how our pupils are doing compared with the national average.

The Amazing Story behind Emmaus School 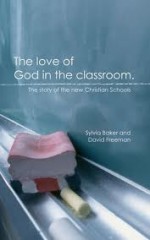 In the early 1970s, some Christians in Bradford-on-Avon became concerned about the need for a Christian school in their area. They held some meetings in their church, but nothing concrete ever came of it. For some of them, the burden remained and they prayed through the years that God would eventually establish a school, even though by now it was too late for their own children to benefit from it.﻿ Click here to read the chapter from this book which tells the story of Emmaus.

The book is available from Christian Focus and Amazon.