Emmaus School is a charitable limited company which was established in 1997 to educate children, aged 5 - 16 years,  to a high standard, in preparation for contemporary society, in a supportive and happy family-orientated environment which caters for the needs of the individual whatever their level of ability or background. We do this by starting from the understanding that we are all made in the image of God, which gives human life dignity and value.

Each child is uniquely created by God, loved by God and known by God, regardless of their faith and social or ethnic origin. All relationships in the school flow from this starting point and teachers strive to establish an atmosphere of mutual respect, recognising that, although adults and children alike are imperfect, the perfect example has been given for us to follow in the life of the Lord Jesus Christ. We aim to model Christian character to children so that they will want to know God for themselves and choose to follow Him. The purpose of their schooling is to develop the God-given talents and abilities of pupils so that in adulthood they will make a positive contribution to society.

How the School Began

The start of the school was unexpected  and dramatic, and came about when the current headteacher, Miriam Wiltshire, was given the old Victorian School in Staverton which now houses Emmaus School teachers and pupils.  Miriam and her husband, Kevin, who serves as Chair to the Governors, approached some friends who had been praying for many, many years for a Christian school to start in this area to ask them to be founder Governors.  After appointing a full time teacher, there were still no children other than Miriam’s own children.  However, after many preparations and much prayer, the School opened in September 1997 with 2 teachers and 3 children and over the past 20 years has grown steadily to around 70 pupils.

You can read more about how Emmaus School began here.

Emmaus School is a partnership between parents and teachers in modelling Christian character to children, teaching them that the Bible is an integral part of everyday life, so that they will want to know and follow God, and use their God-given abilities in His service by becoming exemplary Christian citizens who are effective in the extension of God's Kingdom.

Values are based on Galations 5:22-23 which tells us, But the fruit of the Spirit is love, joy, peace, patience, kindness, goodness, faithfulness, gentleness and self-control.

The fundamental truths of Christianity are at the core of our beliefs. Our aim is to live out our beliefs by demonstrating grace and forgiveness, according to the example set by our Lord Jesus Christ.

What is Christian Education? 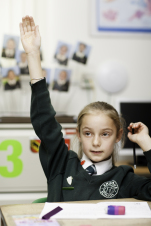 Christian Education is concerned with a child's relationship to God, other people and the world in which we live. It is the best possible preparation for the real world and gives the child the opportunity to develop a sense of identity and purpose. Subjects are taught from a biblical worldview which recognises the world in terms of creation, fall and redemption. God created a perfect world which was spoilt by man's disobedience. Christ suffered so that all who believe in Him will live forever, in perfect happiness, in the new creation that will follow Christ's return.

Christian education aims to produce pupils who can think for themselves and this is a result of teaching pupils to compare the Christian worldview with other world views so that they become increasingly able to articulate what they believe.

In contrast to riding the emotional rollercoaster that many youngsters experience as they battle to find their identity amongst the pulls and pushes of peer group pressure, pupils who have experienced a genuinely Christian education (rather than indoctrination) have proved to be able to live their lives with a steadfast confidence and security in their personal beliefs.

You can read more about this in Sylvia Baker's book, Swimming Against the Tide, which recounts her extensive study of the attitudes and beliefs of pupils in small independent Christian schools, comparing them with those of the wider population of British teenagers. The findings show that the young people in the new Christian schools hold different values from many of their peers, and that arguably the differences are of a positive nature rather than a negative one.